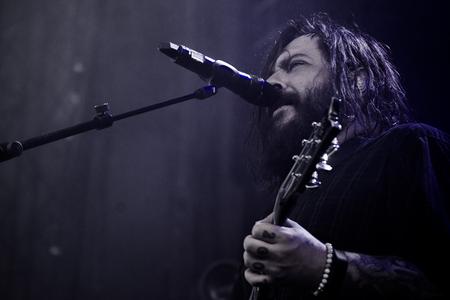 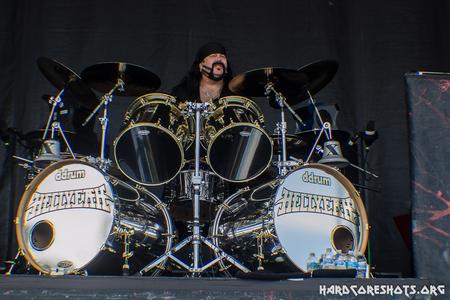 The week prior to the fifth annual Rise Above Fest the music world was shocked to hear the news about Linkin Park vocalist Chester Bennington. This festival was devised to call attention to suicide awareness and upon  that tragic news accomponied by Chris Cornell's unexpected passing in May made this year's festival even more emotional.

2017 would be Rise Above Fest's first time delievering two days of music as opposed to just one. Numerous bands would unify to support a good cause, some of which would include; KoRn, Shinedown, Stonesour, Crobot, Hellyeah and festival founder Shaun Morgan's own band Seether.

The weather would hold up for both days providing nothing but sunshine reflecting off the smiles of attendees. Darling's Waterfront Pavilion was an ideal venue for this festival. Positive music accompanied by a beautiful view of Bangor, Maine's river with a chilling breeze to distract patrons from the sun.

Kicking off the festival was a jam-packed line-up. Three stages of music incorporating non-conflicting sets from: Ded, Dragon Force, Falling In Reverse, Killer at Large, Crobot, Red Sun Rising, Skillet, Seether, Stone Sour, and KoRn. It was odd to see Seether lower on the bill especially since their vocalist Shaun created the festival, but today was not about him. It was about making society aware that people  go through hard times and that things will get better, to not be afraid to ask someone for help, or to help someone out if you know they're faced with hard times.

During Crobot's main-stage escapades, festival goers were treated to a surprise appearance from Sevendust guitarist Clint Lowery. Together they would tackle an amazing version of Audioslave's "Cochise" to honor the memory of Chris Cornell. Seether performed a powerful set dedicating their song "Rise Above This" to both Cornell and Bennington. Stone Sour delivered an intimate take of "Bother" that kind of left the audience pondering the memories of loved ones. They would later cut the emotion with wacky inflatable arm flailing tube men adding a comedic element to finish their set with "Fabuless," a cut from their latest album. Closing the night would be KoRn, a group known for releasing pent up aggression into their music. This festival set would be different. In a way KoRn would provide an excuse for all their fans to release their own anger and emotions that people felt after losing loved ones or idols to suicide. Greatest hits meshed with singles from their new album layed the foundation of their set. Following their stellar performance was a four song encore including "Freak on a Leash"  and "Somebody Someone."

The second night carried even more raw emotions over when artists' Shinedown, Halestorm, Theory of a Dead Man, Pop Evil,  All That Remains, Starset, Kyng, Hellyeah, and Avatar poured their hearts out on-stage.    Hellyeah closed the second stage with a variety of newer tunes limiting their older catalogue. Vocalist Chad Gray thanked every person in the audience for showing up to support the cause of suicide awareness before screaming and performing the next song. New England's own All That Remains melted faces with their driving and melodic riffs. It's always fun to hear the heavy and low-tuned  break-downs coming from the guitars of Oli Herbert and Mike Martin. Theory of a Deadman included their own version of Soundgarden's "Black Hole Sun" within their ten song set. It was accompanied by a setting sun which made the cover even more angelic, as though Cornell was watching from the heavens. Fans were informed that Theory would be releasing a new album this October. Lzzy Hale, appeared with her band to a Maine crowd while simutaneously rocking a shining smile. Opening with "Love Bites (and so do I)" each face in the crowd was rocked by her bluesy vocals and phenomenal vocal range.  Her brother Arejay was in the lime light as well conquering his drum set all night. There was one point during their song "I Like it Heavy"  where Arejay Hale paid tribute to his fallen heroes while pounding his way through his drum solo. He united the voices in the crowd to sing the chorus of Linkin Park's "In The End" almost bringing even him to tears. Ending the night was an extremely emotionally driven set from Shinedown. Shinedown had given their crowd a slew of  inspirational messages throughout their set building a frienship between each and every person in attendance. Zach Meyers was flying around the stage as usual providing riffs and solo's from his guitar to be absorbed by the crowd. Songs such as "State of my Head," "Second Chance," "Bully," and an acoustic version of "Simple Man" filled each and every man & woman in attendance with an idea of what it felt like to have pain and how music can heal your soul. Brent  Smith certainly has a way with words behind a microphone. When he opened up about his relationship with Shaun Morgan and his brother you could tell he was using every ounce of energy to not break down on-stage. He proceeded to talk about hoow no one understood why he would have taken his own life. Smith preached his story about the good times he had shared with Shaun's brother and told each soul surrounding him that if you ever need help... don't be afraid to ask.  The last song played that night was "Sound Of Madness," a song about standing up and rising over all your problems, letting people know you can be down for as long as you let yourself be down but its up to you to change that.

If you or a loved one is ever facing severe depression and thinking about suicide just remember you are loved.  You can help and you can be helped. Call 1.800.273.8255.