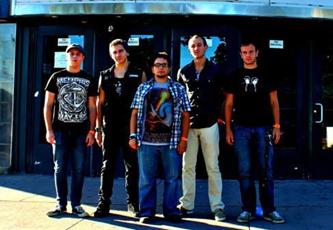 By J.Simpson, C.E.O. of Hardcore Shots

The sun was shining in Bristol today as I met up with Demir Mehovic, lead guitarist for local Bristol band Sirens Over Sumeria. Demir approached me donning his aviator sunglasses and shook my hand. I've known him for a few years now but I finally got a chance to sit down with him face to face and discuss music and his band. The band Sirens Over Sumeria has been around for a while now currently featuring the line up of Jesse Morin (lead vocals), Kamil Regucki (guitar), Brad Lentz (bass), Lukasz Regucki (drums) and of course Demir (guitar.) The band has played many times around Connecticut even headlining a recent show at the Webster Theater. I sat down with Demir at the local Starbucks to discuss his journey.

At first when we formed the band we thought of the name Letters To Burn and the way it was going it wasn't going the way we wanted. It sounded too cliche and too emotional not fitting with the music we were writing so we decided to scrap it. We were trying to think of something that went with our music, something political like our lyrics, something like a big metaphor so we looked into history and found Sumeria which came after Mesopotamia and was one of the most powerful empires in the world but within a century would collapse on itself. It's like a metaphor for today, what our world is, with the nuclear weapons, the money and how no one cares about the individual or their health, it all revolves around the government. We are the sirens and living in modern day Sumeria. If we keep going the way we do eventually we too will collapse.

Your band plays a lot of battle of the bands, what is your favorite song to play live?

We've only been playing together for a year and a half, we have continuously been writing and haven't stopped writing. We probably  debut a new song at every show. We tend to pay attention to the crowd to see how they react, if they walk out then we probably wont play that song again or will put it at the end. My favorite song to play right now is "Don't Worry Guys i Cleared This Song on Medium" which is our one of out older songs. It has fast parts and face melting break downs.

That's what it is all about!

Prior to our interview you talked about how the band was working on an EP, when can the diehard fans expect that to come out?

Well right now we are signing copywrites, we can put in orders this week we already talked to the company for cd printing case printing and we will probably have it out by next month.

What is your favorite guitar to use onstage?

Right now its my LTD NT-350, it has EMG pickups. It's pretty much the guitar I use onstage and durring practice. I used to have an Ibanez which sounded great and was comfortable with the slim neck, but onstage I like to move around and with this guitar I had no mobility so I had to sell it. Other than that we have a back-up Schecter especially after the incident where it was our first show and I snapped a string.

You use the strings that don't accumulate dust right?

Yeah I like to use the DR DDTs. I've never had a snapped string with DR's they are pricey but they are worth it.

How long has Sirens Over Sumeria been together?

The current line-up has been together for 1 and a half years and it's been better than ever. For five years it's just been the other guitarist , the drummer and myself. We've been going through singers and bassists and haven't found anyone with mutual feelings but then we found Brad our bassist and Jesse our vocalist and everything from there on just clicked.

Looking back on you guitar career would you stick with what your doing or would you go back and change everything?

I'd definitely keep going! I'm always going to be writing music, even when I wasn't in a band I was writing music. When the initial band was formed we had an entire album already recorded, we perfected some tracks and some we just tossed out.

Would you recomend that up and coming artists try to break on through into the industry? I ask this because there are so many people who say that the music business is on a steady decline.

The way I see it and how everyone else in the band sees it, we all have day jobs, we all go to school, we have a safety net because we know its hard to make it. There are bands out there that in my opinion completely suck but if they can make it then we can make it too. But thats not completely true because the music business now adays is about being in the right place at the right time. So even if you're talented doesn't know mean you'll get signed or get noticed. Just make sure you have that safety net because you don't want to hurt yourself.

What amps do you guys use while playing onstage?

Kamil and I both use Line Six spider 3 amps. They are both 150 watt amps. We are trying to invest in some stacks, we are saving up to buy a  PV or Line Six stack. We've become good fans of Line Six since we've started playing.

If you could have any guitar in the world what guitar would it be?

Oh man, I have two answers for that. Because I play a seven-string guitar, I would have to chose this Ibanez that Misha Mansoor from Periphery has. It is the most beautiful guitar, it has EMG 82's , blue glittery body, and a thin neck for easy sliding it just sounds amazing. For six string I dont really have anything in particular, as long as it has EMG's and a thin neck, that doesn't restrain me from moving onstage.

I appreciate having the chance to sit down with you and talk to you Demir. Thank you so much for the opportunity.

No problem man, any time.

Sirens Over Sumeria are going to be playing numerous concerts in the area this fall. Two shows at the Webster Theater in Hartford, one on October  6th and one on October 12th as well as one show at The Space in Hamden on November 9th. Check them out on Facebook HERE. Check out their Reverb Nation HERE.