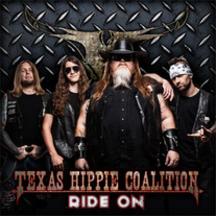 The first single from RIDE ONentitled "Monster In Me" 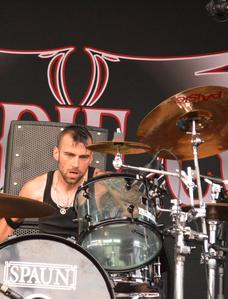 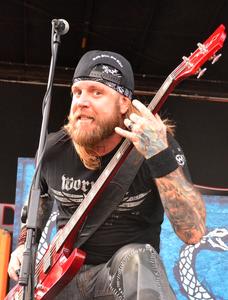 Talkin' THC: My Interview With The Texas Hippie Coalition

At the 2014 Mayhem Festival I had a chance to speak with one of my personal favorites on the tour: The Texas Hippie Coalition. I sat down with the band which included three members of the quartet. Some of the nicest dudes to talk to, here is my interview with Texas Hippie Coalition bassist John Exall, guitarist Cord "Getcha'" Pool, and drummer Timmy "The Hitman" Braun.

What's up guys my name is Joey from Hardcoreshots.org and let me just say the first time I saw you guys perform was at last year's Rock and Shock convention in Worcester alongside Danzig. The first time I heard you guys was on Hard Rock Radio Live. As soon as I heard "Turn It Up" I was hooked and was immediately a fan.

John Exall: Thank you very much

No problem! So the band hasn't been in the studio since 2012's PEACE MAKER. Are you guys planning to hit the studio anytime soon?

JE: Yeah, after Peace Maker we toured a little bit. But we just wrapped up our new album called Ride On it's coming out on 10.7 (the date was pushed back from a July release.) We're going back to our roots. It's going to be a lot like Pride of Texas was. We got to work with some great producers. Skidd Mills who's worked with Saving Abel and [we worked with] Bob Marlette.I got to bring my bad boy Timmy back! He came in and killed it on the drums and Cord Pool wrote a lot of that album with those guys.

Do you have any plans after this tour? Possibly a headlining tour?

JE: Yeah when the album drops we'll go out and do our own tour. We've got some one-offs right now, we're doing Ride for Dime.

JE: We've been talking about going to Japan to do a couple shows over there. Our schedule's looking pretty good. But as soon as that album drops we'll be playing on our own tour.

You guys are familiar with Hartford. You've performed a few times over at the Webster Underground. Do you have a favorite place to go when you're in Connecticut?

JE: We like to go look at the WWE headquarters. I Just stare at it. [laughs] I'm a big wrestling fan. I took a tour inside. It was pretty cool.

Do you have a favorite song to perform?

Cord Pool: We all play different ones

TB: We changed it up this tour. Sometimes we'll throw in a different one, take one out or even take two out. It keeps it fresh. The crowds might be different but some people on the tour who have to listen to us every day might get bored so might as well throw in a twist.

Do you have any favorite bands on the tour?

ALL: Body Count and Mushroomhead

JE: Korn, I love those guys.

TB: It's hard to always catch everybody.

JE: There's so many big bands on the tour it's hard to catch em all. We all dig body count. I'm a big fan of Ice T.

I'm really glad you guys got out on this tour. I'm glad you're getting the exposure that you  deserve. Usually when I mention Texas Hippie Coalition they say "Who the hell is that?" and hopefully that's going to change soon after this festival.

JE: Right on man! Thanks for the support

So you've got a couple days more dates left on the tour. Do you have any highlights or favorite stories so far?

JE: Errr They probably do. We're just out here making friends. Hanging out with all these people, real rockstars. We're fans... we're not only musicians we are big fans. For us to be out here with people like Korn and Ice T and be on the same bill it's just an honor.

So Texas Hippe Coaltion is shortened to THC. So how did you get that?

JE: Well our singer was in a band called Texas Hard Core. When I got with him and tried to get this band going we were trying to use the name THC but not Texas Hard Core so we became Texas Hippie Coalition. Brotha we apreciate you having us!

Thanks guys it was nice meeting all of you!