You Can't Stop Me: An Interview With Eddie Hermida 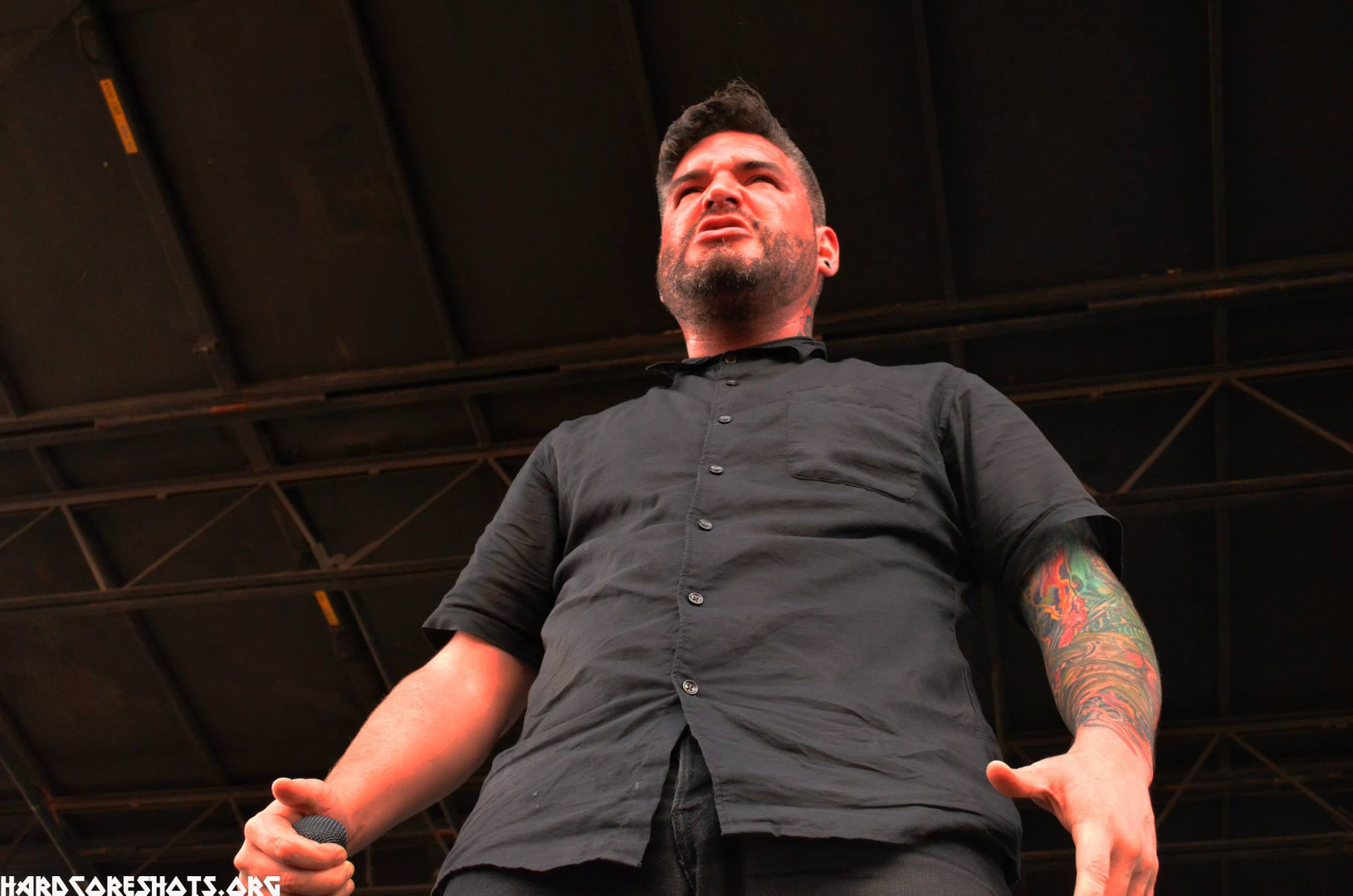 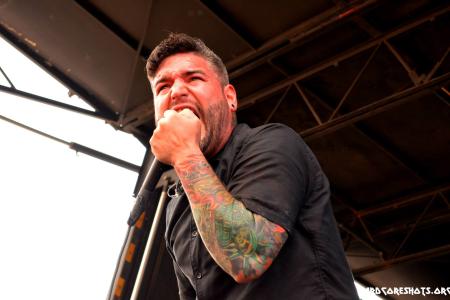 On July 27th I had a chance to catch up with current Suicide Silence vocalist Eddie Hermida who replaced former vocalist Mitch Lucker. I came prepared with a slew of questions.

My name is Joey from Hardcoreshots.org out of Hartford Connecticut it's great to meet you.

Pleasure to meet you guys.

I just want to get this out there, for the record I never really listened to Suicide Silence before you joined. I wasn't really a big fan of Mitch Lucker. Once you joined though it changed for me. I've been listening to the new album non-stop and with you on vocals and I've got to say it's kick ass.

I  appreciate that, it means a lot. It's cool because for a lot of the fans it's the opposite. They were weary on whether or not i would be able to pull off the Mitch vibe an the Mitch sound. I'm not trying to do that but I'm trying to capture that vibe 100% and make sure Suicide Silence still sounds like Suicide Silence, which they still do. Musically this record showcases the bands music a lot more and I'm really proud of this record.

It's a great record. You've got George Fisher from Cannibal Corpse. What was that like working with him?

Well they were in Florida recording their record and he squeezed a little time in his studio and sent his part over. It's an honor, George is and always has been an inspiration to me and I've always loved his voice. I think he's a beast and for him to be on the record is an honor.

You also have Greg Puciato from The Dillenger Escape Plan on the record.

Yup. What's funny is that the stories kind of have a similar happening. We were all just drinking together, having a good time and it just came up. "Hey dude would you be down to sing on this record?" "Yeah man why the hell not? Let's do it!" I've loved Dillenger for a long time. I've seen them with and without Greg and for me to have them on the record is an honor.

On the new record you cover the Hatebreed song "Last Breath." Is that one of the bands you look up to?

Satisfaction Is the Death of Desire is one of the first records I fell in love with. In fact I went to Ozzfest in 2001 just to see Hatebreed. They were literally the only band that I cared to see. I got to meet Jamey and the boys and they were all kind. It kind of set the tone for me wanting to be in those shoes. Wanting to be onstage, wanting to be nice to fans like they treated me. They're one of the bands I'm always gonna look up to. Jamey is a good friend. When you're at that level when you're peers with musicians that we've always looked up to it's a real feeling.

Having the cover on the record had a lot of meanings to us. "Last Breath" was a song dedicated to a friend Jamey lost. You know we lost Mitch and the song is dedicated to him like that. We were also working with Steve Evetts who recorded Satisfaction in 97. It's also the song the band would soundcheck with so when ever they were playing headlining shows and Mitch couldn't sing a song or was available for sound check it's a song everybody can pick up and everybody knows because everybody loves Hatebreed. It's one of the easier songs on the record and it's also the heaviest. It's one of the first songs I went into the studio with the guys to knock out without trying or practicing.  We were able to change it up and make it a little more deathcore. It's a cool thing for us to do and if we could ever get Jamey to get onstage and sing it with us... [Which he did, check out the video to the right.]

The band just recently released the music video for "You Can't Stop Me" which features a cameo from Jason Mewes AKA Jay of Jay and Silent Bob. I was laughing so hard when I saw him at the end.

Yeah. We all think Jason is fucking hilarious. Jay and Silent Bob Strike Back is a band favorite. I remember standing in line to see that when it premiered, so for me I was blown away working with him. He was really nice, really professional he came out and was available to do it. He was one of our first actor ideas. We were like "Hey man we should get Nicholas Cage or Adam Sandler because he plays guitar." We thought Mewes would be even more perfect. He'd be more in touch with younger fans and they'd know who he was. He was out in LA doing his Jay and Silent Bob tour and just happened to be doing rehearsals. We were like "Hey man come do this video it'd be really tight and wont take up much of your time." He was so down. He came over drank a Red Bull and laid out a bunch of different takes. They were all hilarious and it was difficult to choose which one to use.

Do you have a favorite song off the new album?

I really love the first one "To Carry The Crown." It's a message to the fans: Hey I'm here to take over and whether you like it or not I'm gonna be here. It's also: If you trust in me we can have a good time together, the vibes still here, we're still Suicide Silence. That's been my biggest concern, making sure people know they're not losing much by having me come in that I'm still giving them my heart, to me it hits closer to home and for me it's also a little message to Mitch.

I've never had a chance to meet Mitch but I caught him at a previous Mayhem Festival. I'm sure he was a great man.

He was a sweetheart. He had a lot of love for people... but he hated people at the same time. He was one of those dudes that  wanted to be every ones best friend but it hurt him to be hurt by people more than anything else. He lived a life that had a lot of dichotomy in it. its like when you give your heart and soul to something and you don't have enough heart or soul for your own life or own personal thing, it wears you thin. Especially towards the end of his life I know he was having a lot of heart ache and a lot trouble so its really hard to see him go because I wanted to see him smile. But he got to go onstage every day and he got to do what he loved and we all fucking miss him for that.

Were you surprised to be chosen to replace Mitch?

Absolutely. At first I even told the guys I was like "I don't know if you guys want me. Maybe you want someone who looks a little more like the part or is tall or doesn't have a deep voice." There were a bunch of reasons why I thought I couldn't do it. But a day after I thought this is perfect! It's a good idea, I was a friend of the band, I was a friend of Mitch. Who better you know? The record sounds great and when I knew I was gonna be in the band I knew the record was going to be incredible. I just went in after a second of doubt and I'm really proud of what's been done.

It's been really great talking with you Eddie. Welcome to Hartford.

Thank you I appreciate it. 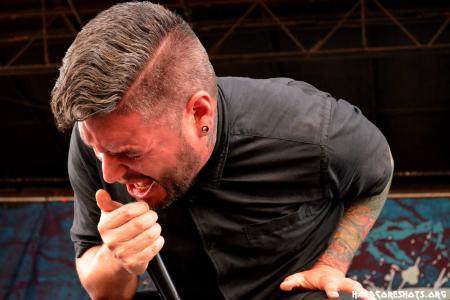